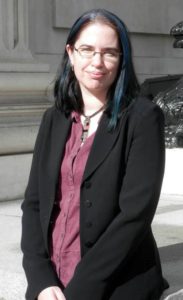 Dr. Melanie Dobromylskyj qualified from Bristol University in 2004, having also intercalated a BSc with honours in Veterinary Pathology at the RVC in 2002. Following a 13-month rotating small animal internship at the Animal Health Trust, she completed her PhD in bovine molecular immunology at the Institute for Animal Health, Compton, and the University of Cambridge in 2009, studying the receptors expressed on natural killer cells. She then spent a year as an anatomic pathology resident at Glasgow University before joining Finn Pathologists, Norfolk in 2012, where she continued her training as an anatomic pathologist in conjunction with a part-time residency at the RVC. She became a Fellow of the Royal College of Pathologists in 2014, and is now a full-time diagnostic histopathologist at Finn Pathologists, as well as an Honorary Lecturer in Anatomic Pathology at the RVC. She has a particular interest in feline pathology.